Hasbro recently announced at an investor’s meeting they were going to slightly deemphasize the “Mr.” and “Mrs.” in their popular line of vegetable toys, releasing both versions under a unified “Potato Head” branding.  Under ordinary circumstances I have to believe this wouldn’t even have been mentioned in anything other than obscure trade zines like “Strategic Corporate Branding Quarterly” or “Inside Marketing: The Zine.”  Industry folks would’ve read it and said, “Humph, look at that,” and immediately went on with their day trying to foist erection pills and absurdly titled heart medicines with more potentially lethal side-effects than benefits to a COVID-weary American public.

But these are no ordinary times.  RIckles just guffawed from the grave. 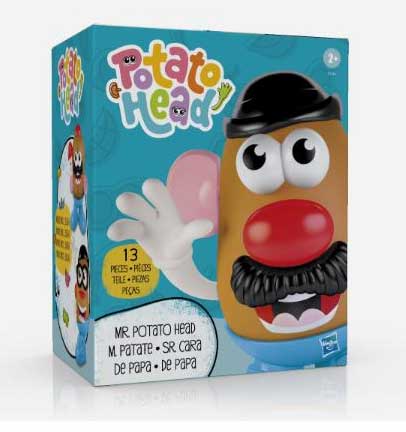 Having 24 hours of “news” to fill for a still largely captive audience means you have to substantially lower the bar on what you’re willing to categorize as “news,” and thus an erstwhile obscure branding decision – perhaps designed as an ever-so-slight nod to LGBTQ sensitivity – was instead thrust into Silly Manufactured Controversy territory.  In short, media folks were looking for stuff to write about.

Right-wing news went nuts, drawing a direct line between this toy branding decision and a “Democrat-led House of Representatives is taking up a vote on the Equality Act” according to Kylee Zempel in The Federalist, and prompting Fox News to mention a toy’s minor rebranding effort almost 40 times.  Apparently even a bald vegetarian icon can warrant Right-Wing Wrath in the post-T****ian newscycle, freshly emptied of his endless supply of self-promoting shenanigans.  I’m not typing his name anymore.  Not for ideological reasons just because I’m sick of it.

Why?  Asinine political overlays aside, do conservatives put so much more faith in minor rebranding efforts of toy manufacturers than their own abilities to parent their children that this is a tangible threat?  Aren’t they going to instill their values into their next generation regardless of whatever Hasbro branding gurus decide?

Of course they are, which is why this is more artificial silliness than a Beverly Hills plastic surgeon’s Facebook page.

Advocates on the Left spectrum also dove in, for similar reasons and because they could, reaching into botanical metaphors, like Alex Knapp at Forbes: “the science of potato reproduction, [is] far more complicated than male and female. And the toy company’s impulse towards a gender-neutral toy isn’t just more inclusive, it’s closer to the actual science of potatoes.”

The science of potatoes and the Equality Act?  All they did is take “Mr” or “Mrs” off the TOP OF THE BOX, it’s still there at the bottom.  It’s not science.  It’s not politics.  It’s no vast conspiracy or politically motivated ploy by Democratic sympathizers.  You’ve just got column inches and “breaking news” segments to fill and it’s silly.

If your kids are learning about gender identity from the top of a toy box, parent better.