VATICAN CITY - Addressing a large crowd of refugees, today Pope Francis told the assembled poor and displaced that god "holds you in his great hands" and would "try His very best to do good things for you, despite putting you through endless misery, including poverty, famine, and death.  He loves you." 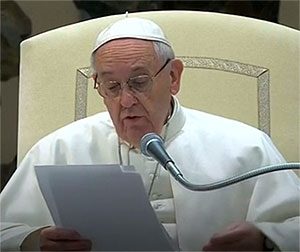 Applause was scattered as the pontiff’s message was translated into over a dozen languages.

“You should not give up hope,” Pope Francis continued.  “Despite your endless agony, pain, and suffering, in the next life you shall sit at the highest of all tables, on the highest of all chairs, so that you can see the table itself, of course, at the right hand of The Father.  As well as Jesus, his only son, who will also be there.  And the Holy Spirit will be blowing around presumably.”

...[All] are welcomed into the kingdom of heaven.  Lutherans, however, will be extremely vetted.

“Unless all that agony, suffering, and pain causes you to take your own life,” the pontiff continued.  “Then you go to the holy equivalent of Guantanamo Bay.”

At this point one of the cardinals whispered something into the pontiff’s ear, and he added, “Also everyone who is Muslim, each are welcomed into the kingdom of heaven.  Lutherans, however, will be extremely vetted.”

The pontiff reiterated that last point several times during the thirty minute address.

An official statement from the Vatican called the pope’s visit “a great success… in raising awareness of the global refugee crisis that affects tens of millions across the globe,” adding “as well as putting Lutherans on notice to ratchet up their piety.”