IRREVERENT Magazine is a news satire magazine: we were doing bogus news before it was popular.

WASHINGTON – In response to this week’s announcement of an “approved” Russian novel coronavirus vaccine, President Trump called the vaccine “completely great and awesome.”

“It is with great pleasure that we make this announcement,” said Russian Ambassador Ivan Kaputnik, joining Trump at the press conference.  “Although we are not fully complete with 100% voluntary human trials, we are complete enough to proceed with widespread distribution immediately,” Kaputnik said through an interpreter.  “Many of the inmates who participated are still very much alive,” he further added cryptically.

“I think this is just awesome, truly, completely great and awesome, a great day for the country and the world, really,” Trump said.  “We need a vaccine sooner than later, and we can’t always wait, this is pretty urgent, really, we need something now.  And I’m sure that when this is released, our Russian partners will gladly share with the United…”

The President paused as Ambassador Kaputnik shook his head negatively. 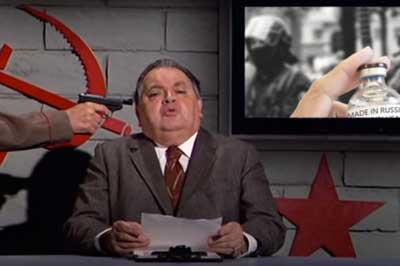 “We will work out some sort of deal, I’m sure,” Trump added.

“We wish to thank all doctors working on these vaccines for their remarkable progress since this tragedy began,” Kaputnik continued.  “Although Russia developed this vaccine completely on her own, certainly in no way stealing from another nation or nations, we realize that the scientific community as a whole deserves credit here,” he said, adding, “but Russia was first.”

In an interview broadcast on the Russian state-run news agency “PravdaLike,” Warden Marko Pavlovof said that the human trials he’d supervised on inmates “went completely great and awesome in fact.”  “These men and women committed a variety of political crimes against the state,” Pavlovof said.  “Yet they immediately volunteered to be injected with [an] experimental drug, which only shows the commitment of every Russian journalist – incarcerated or still waiting to be –to help mother-Russia combat this vicious disease.”

Although bullish on pharma stocks, Wall Street seemingly ignored Trump’s latest Russian endorsement, and took out some late afternoon frustration by beating up tech and construction in a coke-fueled rampage.